Open up for my favourite meal prep “hack”

I have a super time-saving tip for you today – a tip that will make your life easier, save you money, AND help you stay on track with your nutrition.

Here it goes: In a nutshell, most of us fall into two camps when it comes to meal prep. We either overthink it, or we don’t think about it all.

Overthinking is an easy trap to fall into… there’s just SO much “stuff” on the internet, in magazines, and on social media with conflicting information. It’s nearly impossible to filter out all of the noise and to make an actual decision.

So you think about it, you think some more, and then before you know it, it’s time to eat and you still don’t have a plan.

Way too many people (I used to be one of them!) think that meal prep is all about identical-looking bland Tupperware meals (like chicken, sweet potato, and broccoli) and think, “Ugh... that’s not for me”!

That’s when a lot of us join the second camp: “put it off for next week” / or not thinking about prepping or planning meals at all.

There’s actually a happy middle ground! What if you took a few minutes to map out your meals and snacks for the next several days, and when you’re making diner, you cooked simply made 2-3x the amount you usually do?

That’s actually a golden tip from the good old’ days of home ec class, our grandmothers and beyond!

When I was a kid, my grandmother always used to make an “extra” when she baked a casserole or other time-consuming dish. Instead of just one, she would cook up two and put one in the freezer for later.

You can double up by making extra turkey burgers, chili, stir fry, or … well, almost anything! It doesn’t just apply to “special” meals.

Taking this approach means you don’t have to set aside several hours of valuable weekend time to cook for the upcoming week. Instead, you spend your normal amount of time cooking … plus 5 to 10 minutes each week PLANNING your meals.

This seems like a no-brainier, but the PLANNING part of it makes all the difference, especially if you’re used to trying to figure out every night what you’re going to make for dinner.

Have an amazing day! 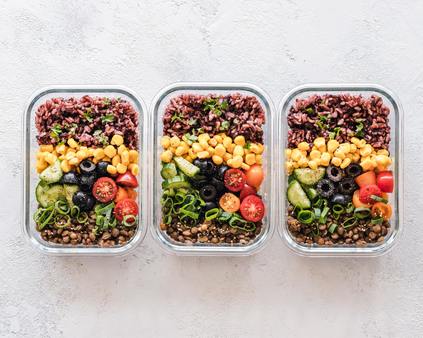 Achieving optimal health and fitness is not an exact science and the combination of exercise and input to achieve desired results may vary from individual to individual. Following lifestyle, fitness, nutrition and general health tips or programs contained on this website/blog does not guarantee that you will achieve the desired results or that you will look like images that might be posted on this website/blog.

Please consult your doctor before beginning any exercise or diet program.